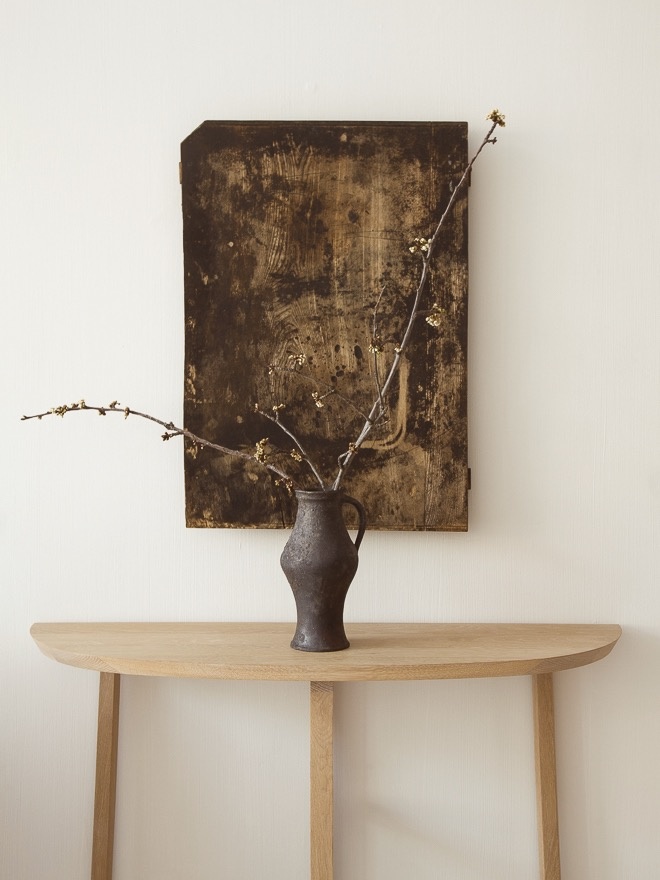 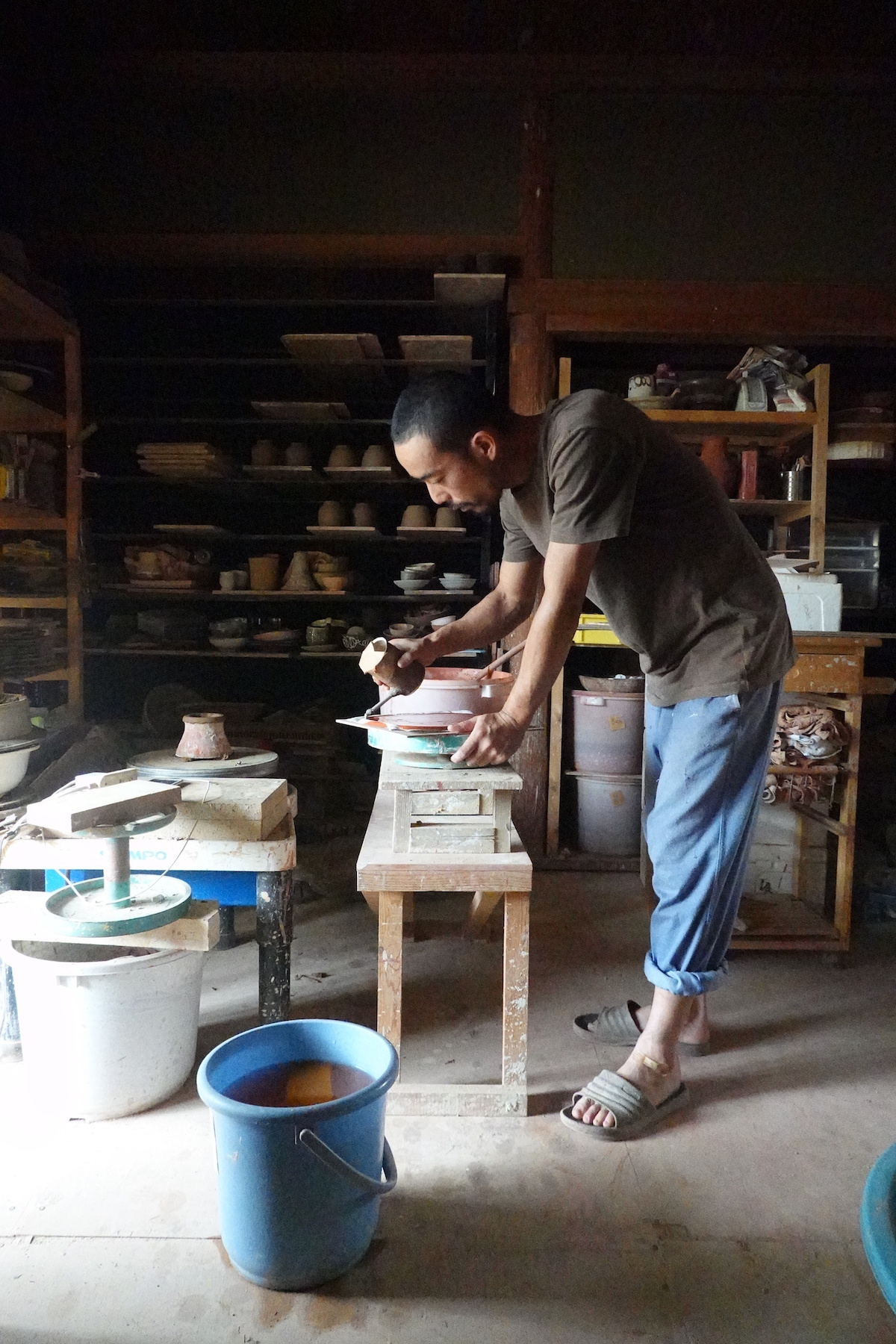 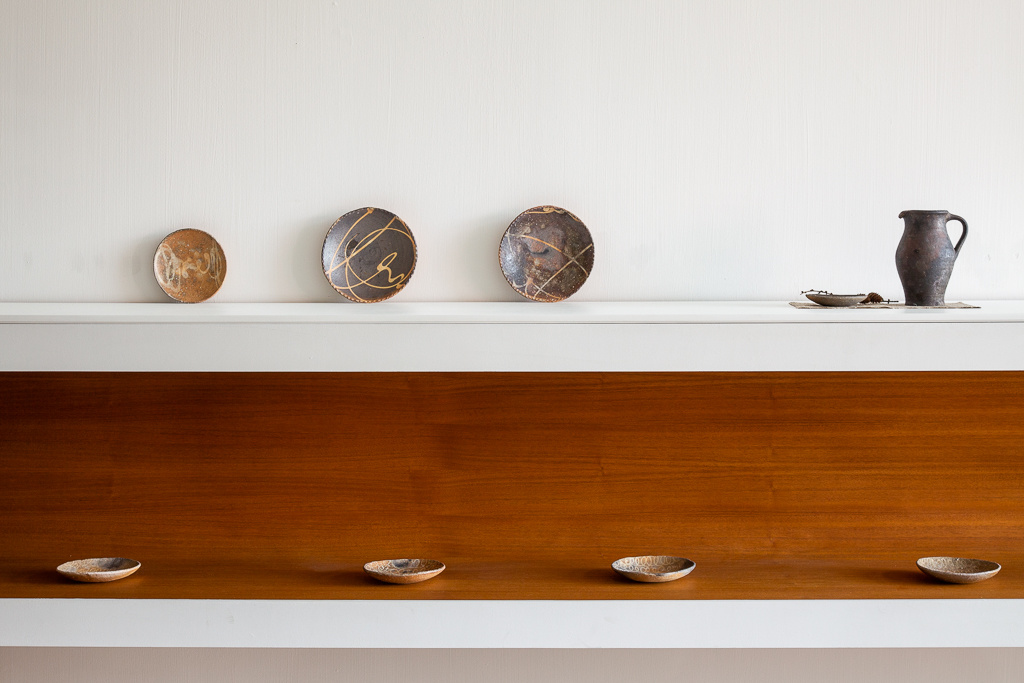 I can see a strong influence in the English slipware from the 19th century in your work. What is it about these pieces that inspire you?

The first time I laid eyes on slipware, I didn’t know why, but I believed that this was my ideal when it came to pottery. So as to understand its allure, I approached 19th century British slipware from various angles to try and understand this allure that it had that I just couldn’t put into words.

When I first started creating, I reproduced shapes and designs and put a lot of effort into creating pieces that were capable of withstanding use in our modern times, but following this approach, there was nothing but nostalgia for the past of a country far, far away, and I began to question whether or not what I was creating could measure up to the true essence of slipware. So, I started using locally-sourced raw materials and a simple method of creating pottery akin to slipware, and what I came up with was yakishime slipware, which has become the central focus of my work now.

I am currently very interested in the potters of the 18th and 19th centuries who created slipware. British slipware created in the 19th century was very instrumental in nature, and I think that compared to other European pottery from the same era, it had a heterogeneous presence, in terms of its shape as well as its unique designs. At that time, there were artisans involved in the field and people who acted as “producers” to the artisans, and while carrying on the traditions involved in pottery, somebody used an until then unheard-of technique and dropped slip onto a flat piece of clay and that’s how it all started. I thought (this is just personal conjecture) it would be interesting to channel the thoughts, the feelings, the emotions of those artisans when creating things.

19th century slipware was the catalyst to my starting this work, and it provides a reason for me continuing it. 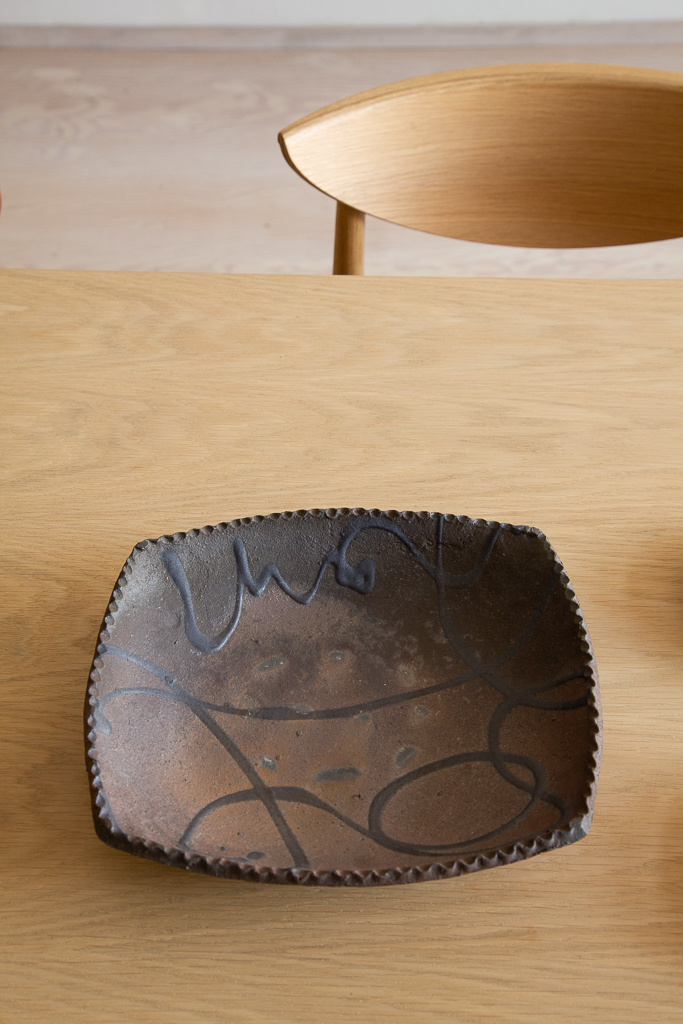 Instead of the glossy glazes you see on slipware from artists like Bernard Leach and Shoji Hamada, your work is more matte and rougher.

To me this makes your work feel modern, but at the same time it feels ancient as a result of the texture of the clay.

That is exactly what I am focusing on – antique pottery, ancient relics. It is my own personal preference too; I am interested in things that have survived through the ages, irrespective of their general value or differences between things that are natural and those created by man. For example, if you hold a cup created 300 years ago in your hand now, you can imagine the time that it has accumulated, the person who created it, and the lives of those who used it.

Today, it is possible for even a cup to be handed down and survive through to the future; considering those objects that have been passed down for the future maturing beautifully is perhaps not an ordinary way of looking at objects. But it is possible that objects that people have continued to use as a result of their own sensitivities and those that have been passed down for one reason or another have a different kind of allure to those that have just been created.
Whether an object becomes something to be considered beautiful in the future relies chiefly on what we as creators bring to our work; by expressing an antique sense in our creations, we create a visualization of the passage of time, and it becomes easier to imagine the future of an object, I think.

It is said that the antique “sense” or feel is just that, a feeling and not real, but I believe that whether such an object is good or what kind of an image we are trying to evoke is important. I believe that as well as being used as tableware, modern craftwork also functions to conjure up other images for us, whatever they may be. 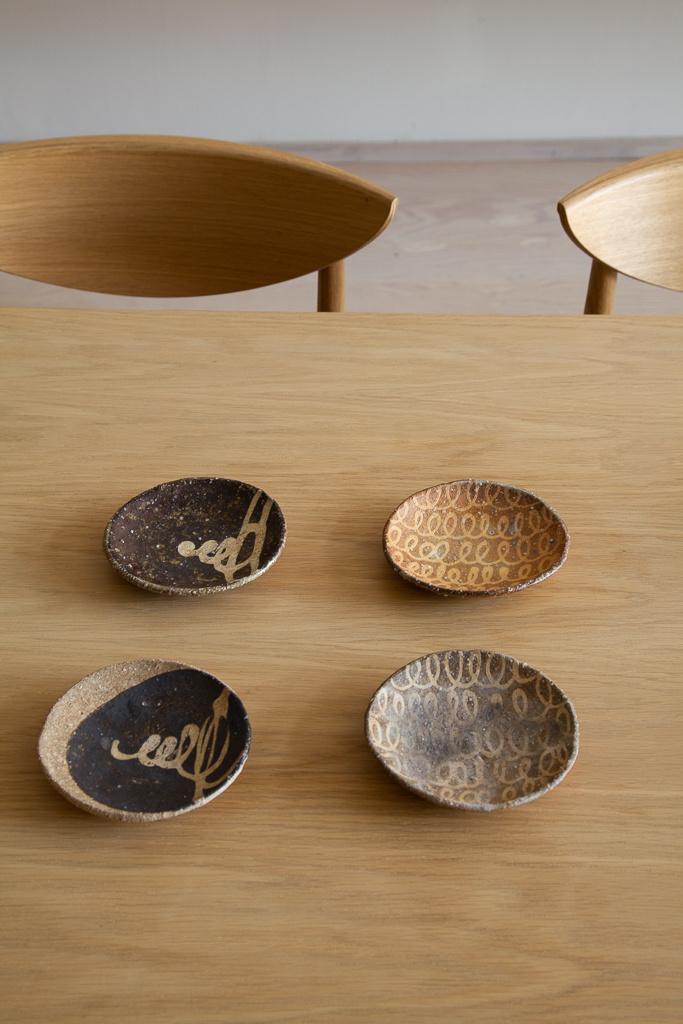 How do you feel about decoration? How do you achieve a balance between slip trails motifs and empty space?

I interpret the designs on slipware as being “lines left as a result of the natural movements of the hand”. Lines are drawn with an impromptu rhythm and an understanding of the characteristics of the material (the consistency of slip, its inconvenience). For us, what gets our hands moving in a comfortable rhythm is Japanese folksongs and African ethnic music.

When it comes to how we go about our work, first we decide on the section we’re going to draw on and the general hand movement, then consign the design to dozens of unfired pieces. As we work, we search for a comfortable rhythm for our hand to take in creating the designs, and then fine-tune them when we find it. The designs are impromptu and are a sequence of accumulated moments. As such, we think of any remaining sections as blank spaces (the clean spaces on the piece). Since we have created pieces that are to be used, perhaps we unconsciously decide on a balance with respect to these blank spaces. 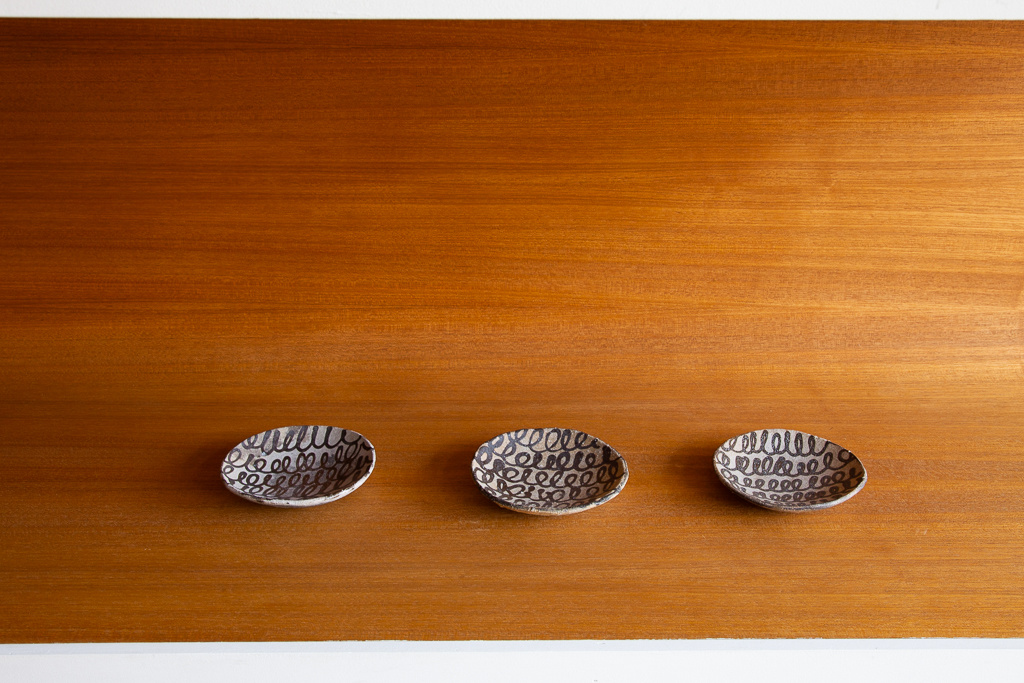 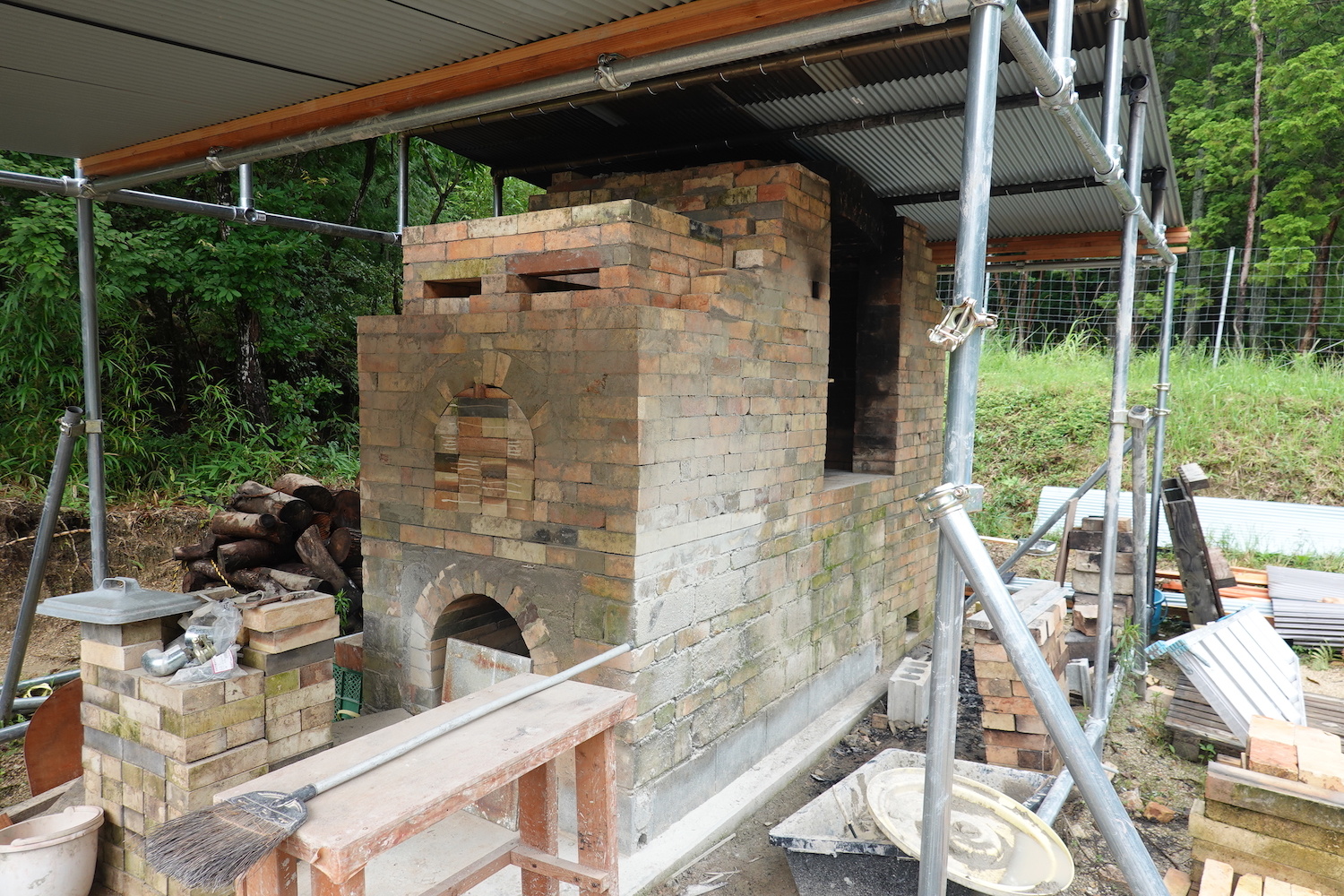 Tell me about your wood kiln, did you build it yourself? How does firing in the wood kiln effect your pieces? How do they change?

We borrow a wood kiln in Shigaraki Ceramics Forest, and mainly use a kiln with what is known as an ittekoi structure. We’ve been firing our pieces once or twice a month for the past three years. Compared to electric and gas kilns, using firewood to fire pottery makes for less control in the outcome of the firing process, and as such there is a sense of dissociation with the pieces that we have created. We continue our efforts to rein in those parts that are out of our control every time we fire up a kiln.

When we use firewood, we abandon a great deal to chance, and so we have consciously chosen to ensure that we don’t add too much detail when we shape our pieces. Blank spaces appear here, too. I’m currently building my own kiln, which is due to be finished next month. 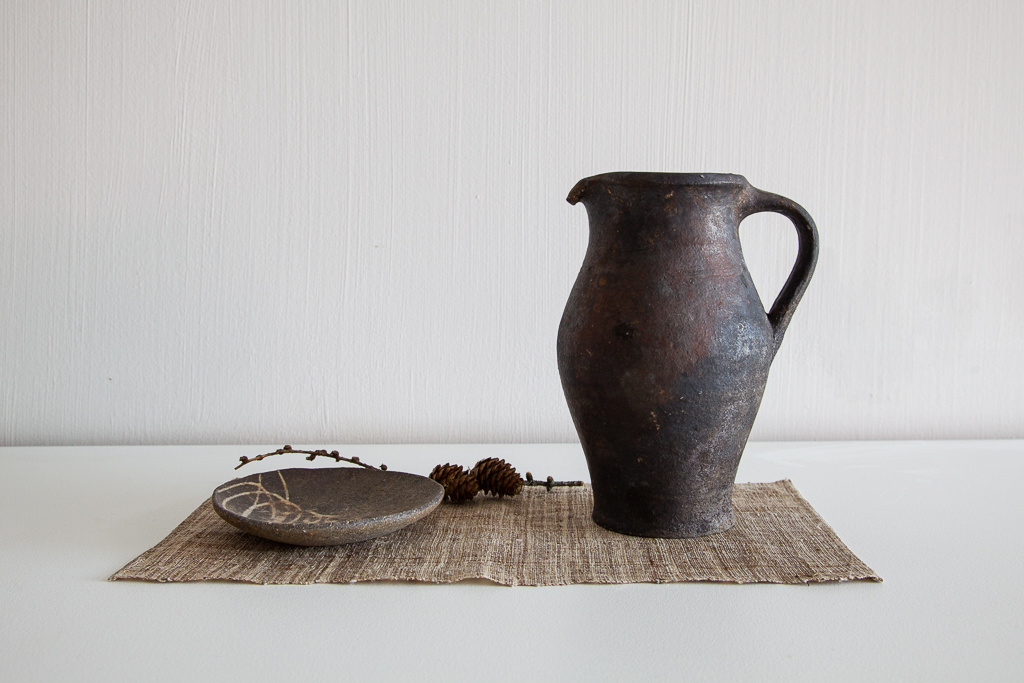 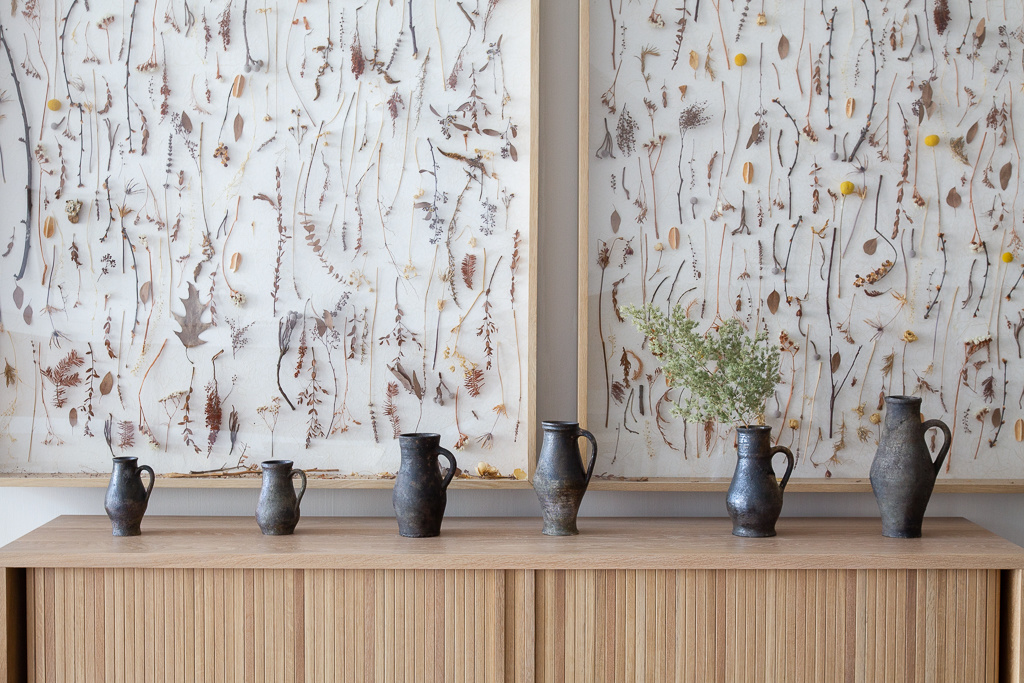 Besides the dishes and plates shown in this exhibition, there are quite a number of vessels / jugs. Some have spouts some do not. Clearly you enjoy this form, are these shapes interpretations from the past? How do you use these vessels in your own life?

I use pottery from medieval England, which predates the birth of slipware, as a reference for the shapes of the pieces I create. Each and every piece differs in shape; I search for lines that provide a pleasing fullness and balance with the handle for each piece. I mold clay sourced locally on a potter’s wheel and use a brush to apply white slip and then black slip, and after having repeated this process numerous times, I fire the piece in a wood kiln.

There is an Englishness to medieval pottery prior to slip that is mesmerizing. There is a degree of freedom not found in plates and pots, and these are shapes I continue to create. At home, I use them to hold flowers or for coffee, but they spend most of the time just sitting there, so they need to be something that is enjoyable even just to look at. 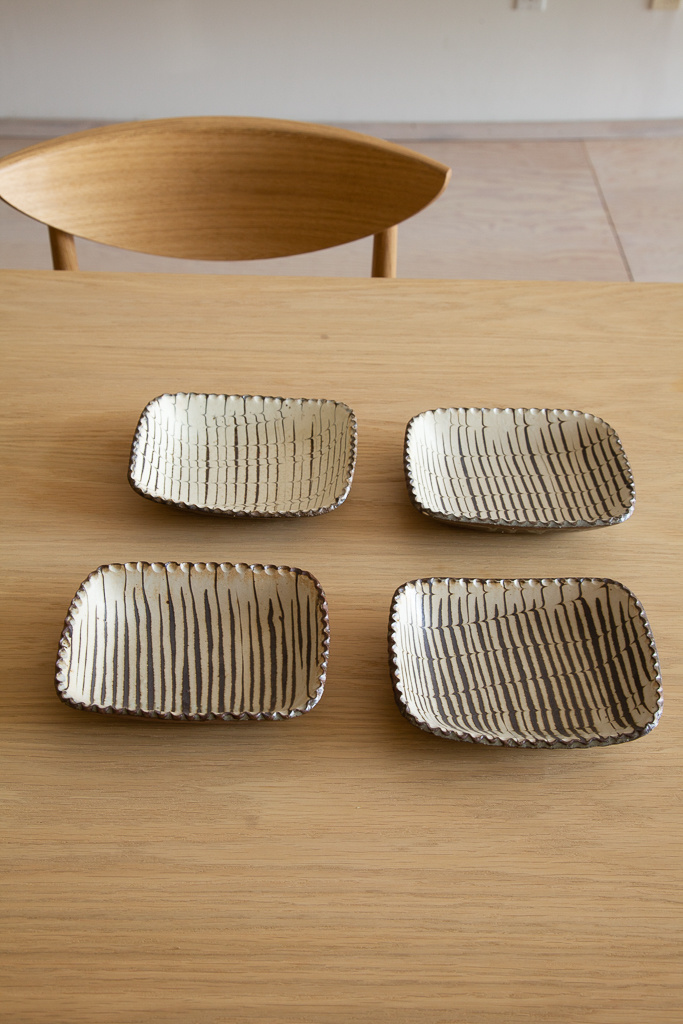 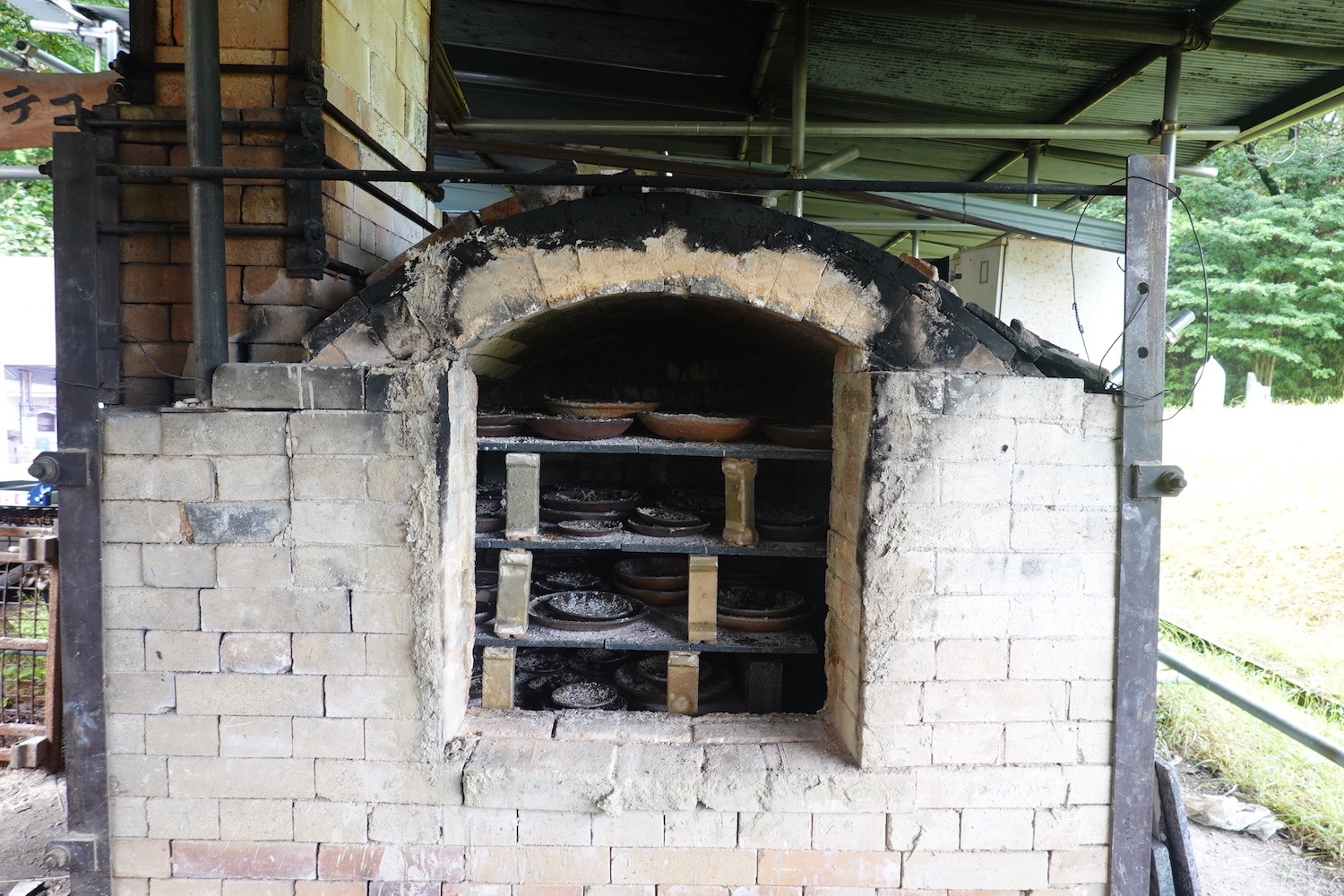 You live in Shigaraki which is very famous for pottery. Are you using traditional Shigaraki clay, or are there elements from the Shigaraki tradition in your pottery?

Currently even in Shigaraki, the clay that is used is on the verge of being depleted, and clay vendors are taking steps to deal with this problem.

With traditional Shigaraki-ware, the changes that arise from natural glaze utilizing ash and firing with flames and embers is called “keshiki” or landscape. From amongst these changes, I especially like what is called “kase”, which is a withered kind of look. I’d like to create something with Shigaraki clay where the lines of slip form part of the keshiki.

I use clay that is easy to make, and clay that is not, as well as white clay and red clay; I sometimes buy clay and I also use clay that I dig myself, but I use Shigaraki clay as a base. These days, I feel that perhaps a complex kind of clay that isn’t used very often in traditional Shigaraki-ware is best suited to my work.

I don’t have any hard and fast rules when it comes to the clay that I use; I use Shigaraki clay because it is close at hand. I’m interested in how to use the clay that is right in front of me and in what kind of lines I can apply to it. 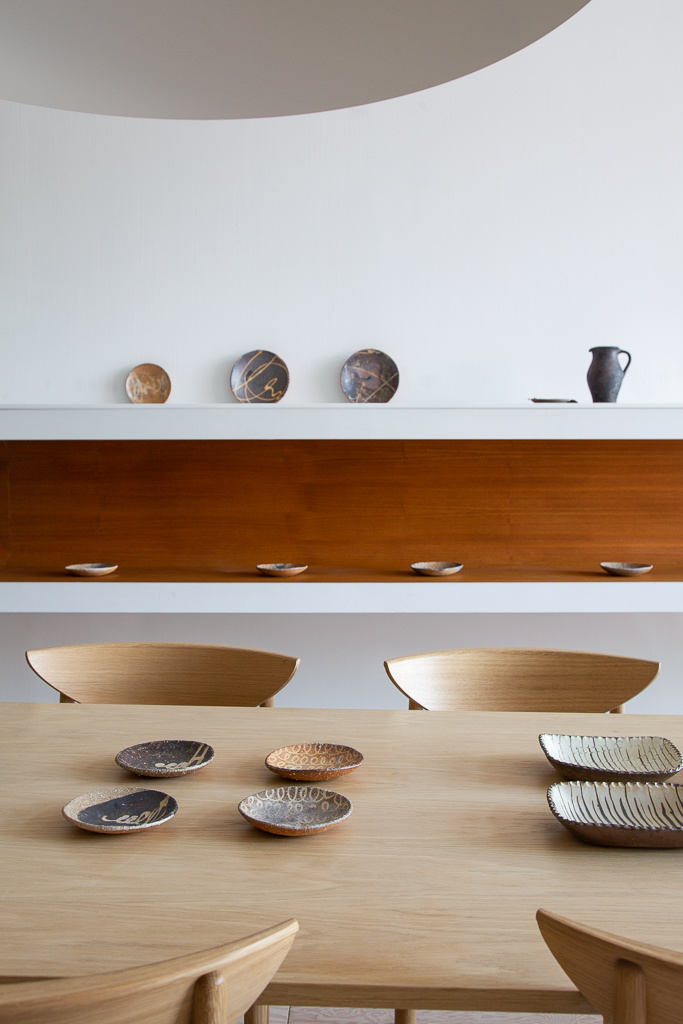 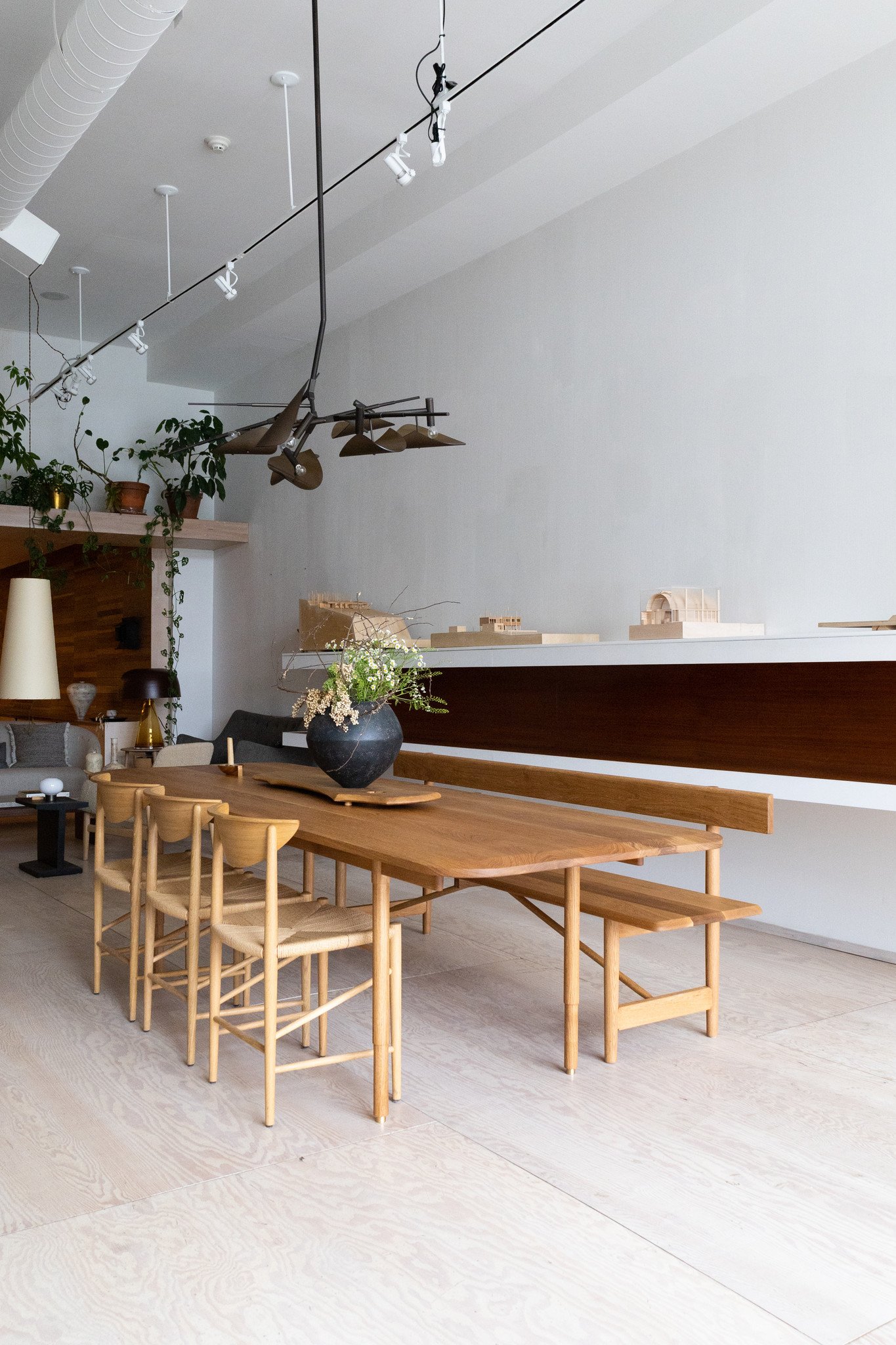 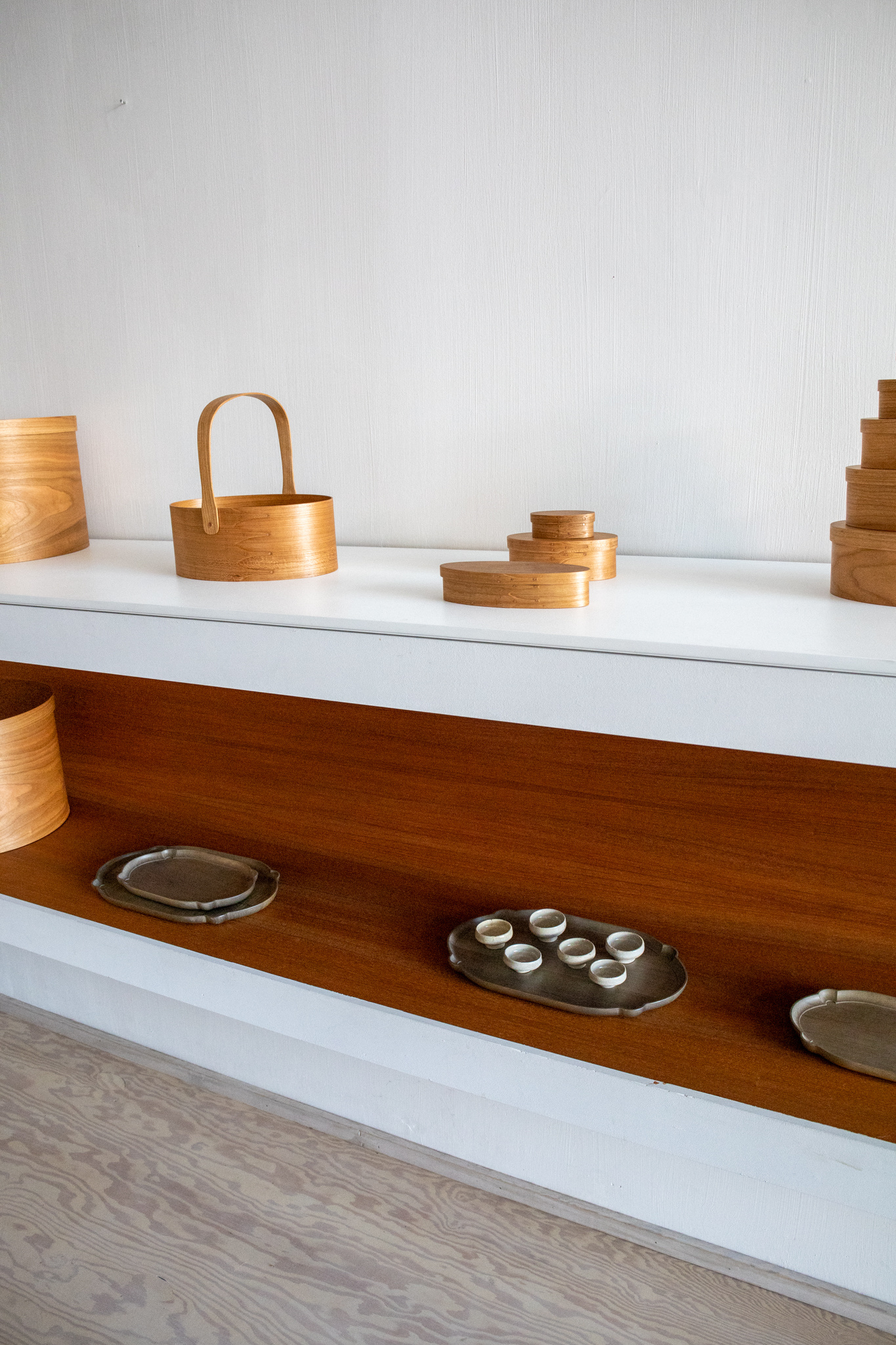 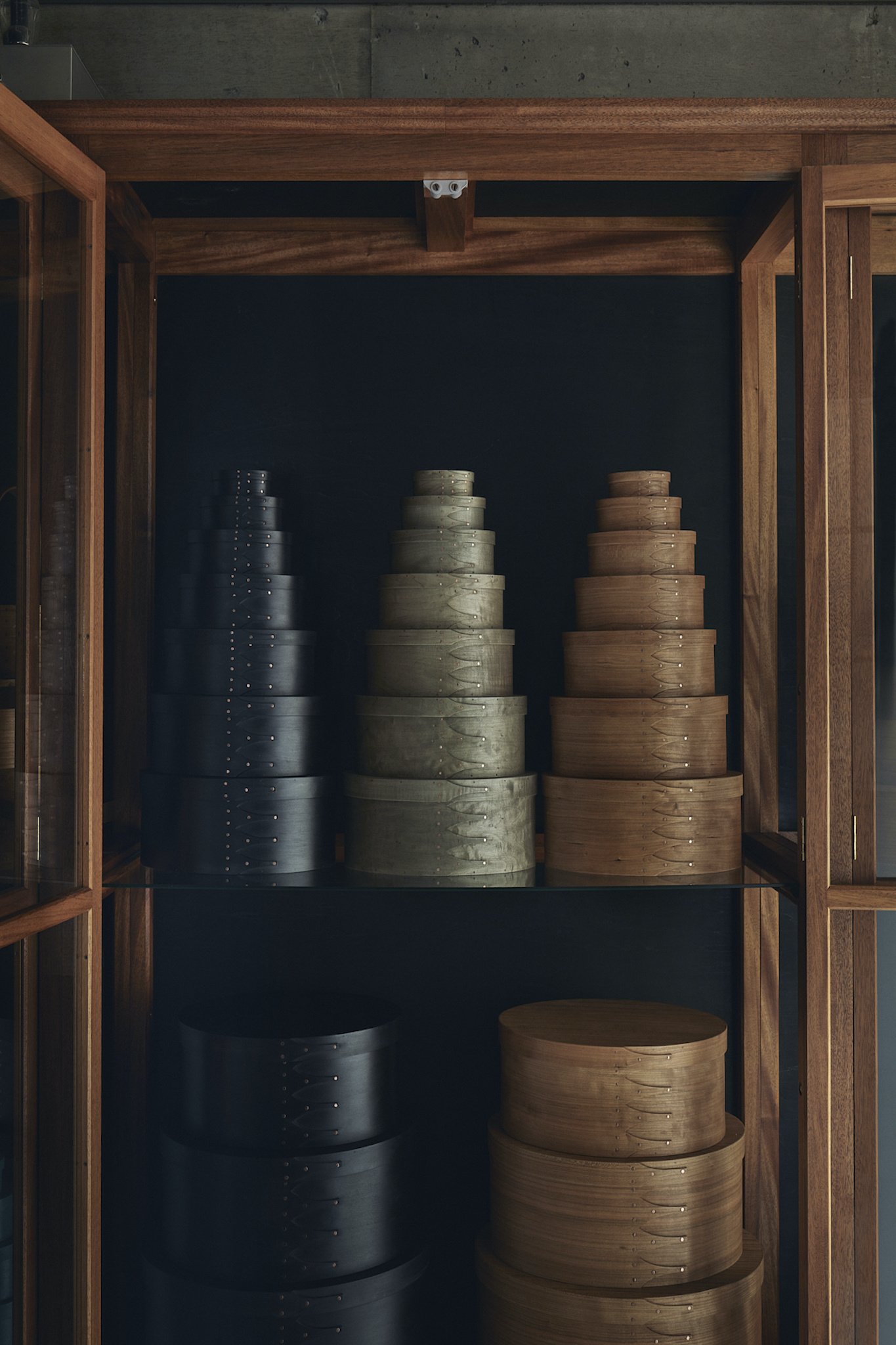